Each year at the state convention for '55-'57 Chevys, DACC members select a 'Favorite '55-'57 Chevy' from the group assembled.
In 2013 the event was held in San Angelo on Memorial Day Weekend, and we selected what we feel is the perfect car for our award on this special Memorial Day weekend event!

Growing up I had always worked on cars with my dad.  I was a car buff, just like him and my dream was to someday (if I was lucky) to do the same with my own son.  While stationed in El Paso, Texas in the US Army, 1987, I met a beautiful girl that I planned to make my wife.  We married in 1989 and were blessed with a son in April 1990.  We owned a 1988 Monte Carlo SS that I raced at the El Paso Dragway, but my goal was to save up money for an older car to rebuild.  I always loved and admired the 1955 Chevy since I was a young man working a long side my dad.  This is the car I wanted to build with my son.

In 1990 with my one year old son and a very small budget we started the search for our dream car in El Paso.  In August 1990 I was called to service for my county when Operation Desert Shield / Desert Storm began and I was sent to Saudi Arabia and then Iraq.  After my return and with my service reimbursement with combat pay we began the search again for our ‘55 Chevy.   I answered an ad in the classified section of Sunday’s paper for a “1955 Chevy with slight roof damage for only $800.00.  (Slight roof damage in my mind is a dented roof, or maybe even a roll over), but to the previous owner “slight” equalled to the extent that the roof was cut off in the attempted convertible conversion!  The car was a shell on 4 wheels with a steering wheel, a back seat, and a roof on the side.  Also included were 2 boxes full of pieces and parts.  The price was negotiated down to $450.

With no garage, the work was to be done in the driveway of the home we rented. My plans for the car was to get it drivable first, then proceed with getting the roof reattached. I started with finding an engine at a reasonable price first and went to the local junkyard and found a rebuilt engine for $500. Then the rebuilding of the brakes and electrical system would be next and during this time I would teach my son and have him do what he could since he was only a year old, he enjoyed going outside with me and helping.  After the brakes and electrical was accomplished, I was able to drive the car and next was to have the roof reattached.  I Found a front seat from a ‘64 Impala and my wife got the seats reupholstered and door panels made at a reasonable price.  While waiting for the seats and upholstery to be done, work would be done to make it drivable for the street.  We accomplished getting the vehicle in a safe drivable condition by the end of 1991.

In the summer of 1992, a move to New Orleans would happen.  The car came with us on the move.  Sometime in 1993, the rebuilt engine had enough and died.  For 2 years, the car would sit idle in the garage, until money was saved for an engine.  In 1995, an engine was purchased and with the help of my son, we would install the engine and the car was able to cruise again.  Also in 1995, my job would relocate us to Del Rio, Texas.  The car stayed at my parents until we built our house in Del Rio and could relocate the car.  In 1996, we brought the car to Del Rio and cruised again.

After 6 years of cruising in primer gray, money was saved for a paint job for the car. In late 1997, the car would find the body and paint shop and the car was rid of what rust it had with new metal installed and was painted in Del Rio.  The colors chosen were a Spectra Master red metallic and the beige is Canyon Yellow pearl metallic, paint was complete in 1998.  After the car returned home we installed pieces and parts and new molding and the car cruised for about another year.  In 1999, after 40 plus years the original suspension and brakes finally were unsafe to drive with.  So we decided to install a carport and park the car in the backyard until we would have the time and funds to continue restoring the car, since the next part of restoration would be the most intensive.

Fast forward to late 2006, my son now 16 years old and now ready to drive, his interest was reborn to work on the car.  We started by figuring what we needed for the car and what parts we would get, and the ordering started.  We started by taking the front end apart, removing the engine and grinding the entire frame from front to back down to bare metal and then priming and painting.  With frame and under body repainted, we replaced the body bushings and all the suspension with new original parts.  Disc brakes were installed on the front end, then the rear end was removed and cleaned.  Disc brakes were installed on the rear and new leaf springs and associated parts were installed in the rear also.  While the front end of the car was removed, the cowl vents in the lower corners were rotted out and repairs were made.  We removed all the wiring and built a wire harness with new wires being marked with a wire machine.  The engine was reinstalled and front end was reinstalled with a new radiator support and radiator being installed.  All needed seals and gaskets on the trunk lid, doors, and other locations were replaced.  We installed new seat belts and carpet before reinstalling seats.  By September 2007, the car was ready to cruise once again.  The Chevy is still a work in progress, a headliner is needed, all the glass and molding around the glass needs to be replaced, and the light assemblies could be replaced.  All the glass and molding around glass and light assemblies installed are still original items.

We would like to thank the Dallas Area Classic Chevy club for recognizing what has been a long 20 plus years of restoring this 1955 Bel Air 2 door hardtop Sport Coupe. It has been a fun ride accomplishing this restoration project, until the next one comes. Since we now live in San Angelo, we have a better opportunity of entering car shows and gathering with all the good folks that we have met in our first car show. 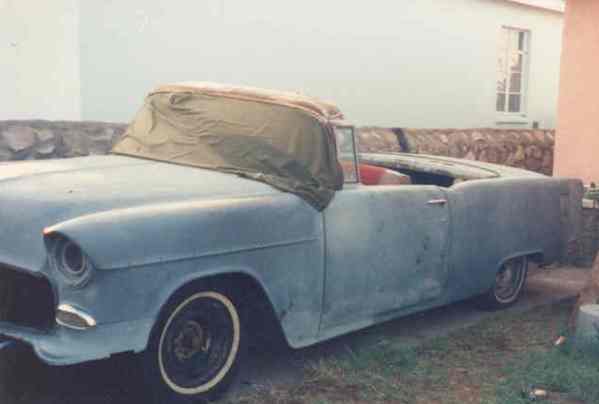 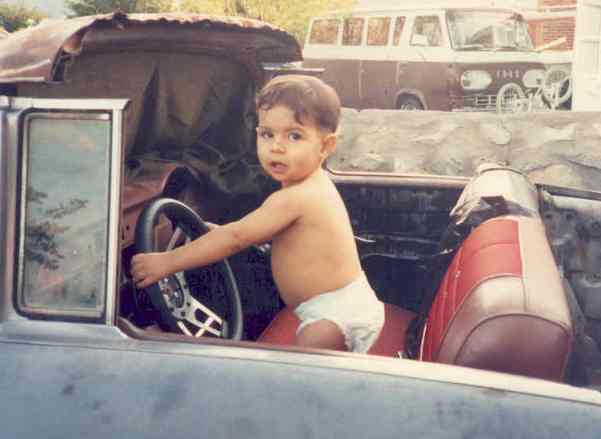 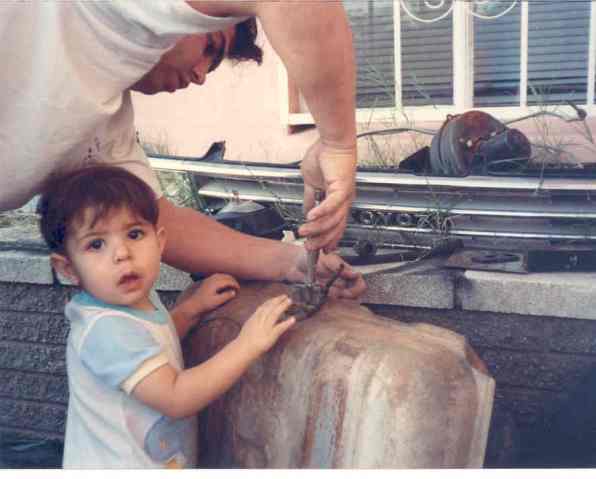 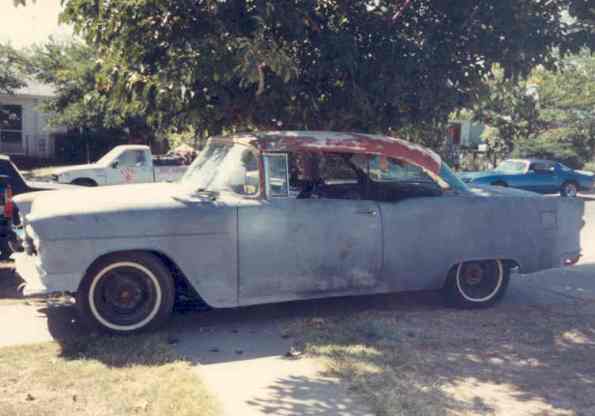 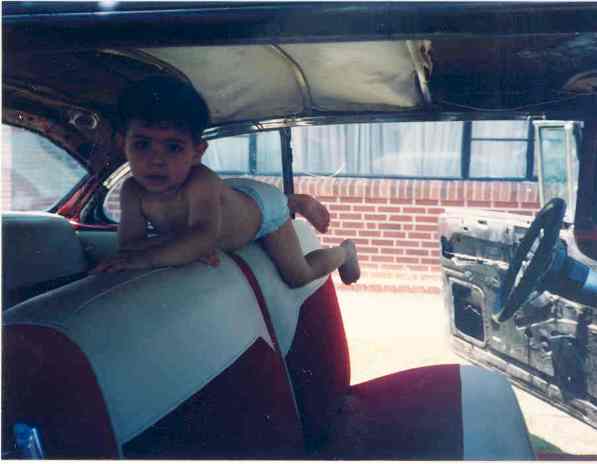 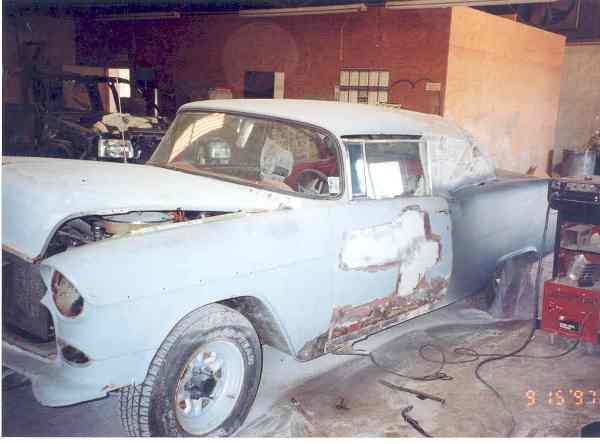 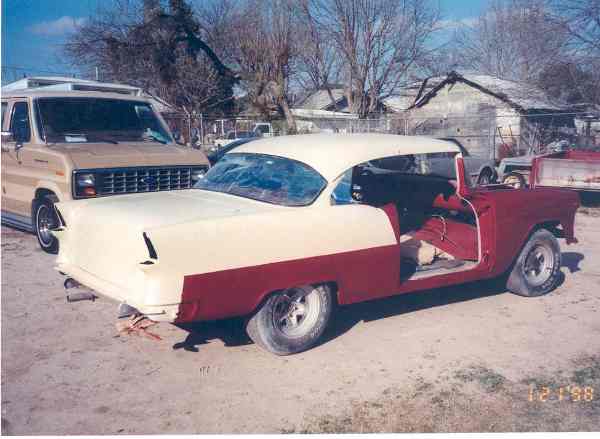 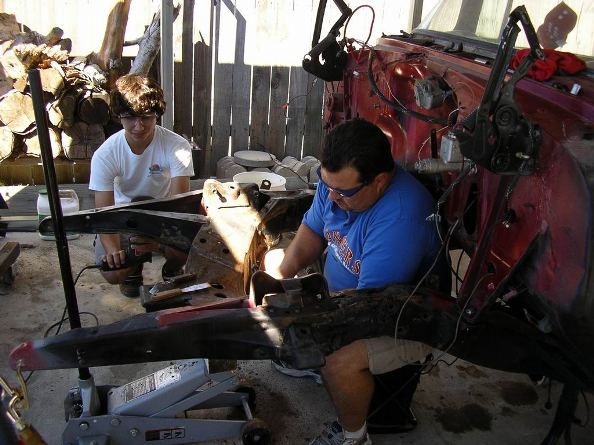 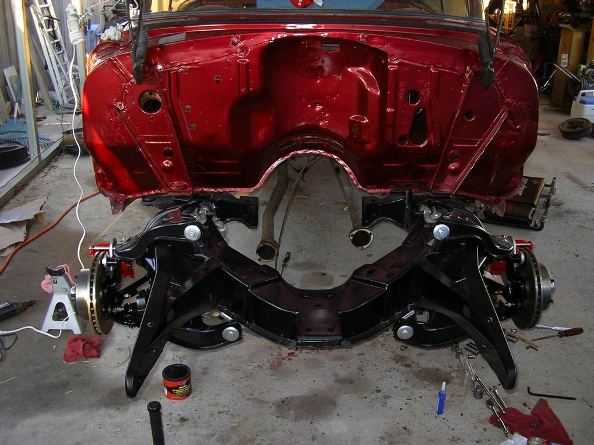 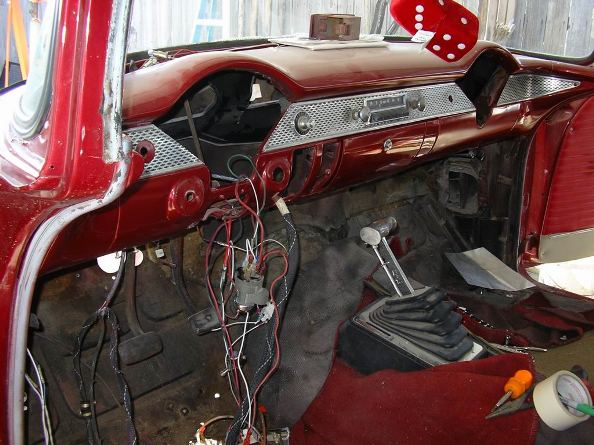 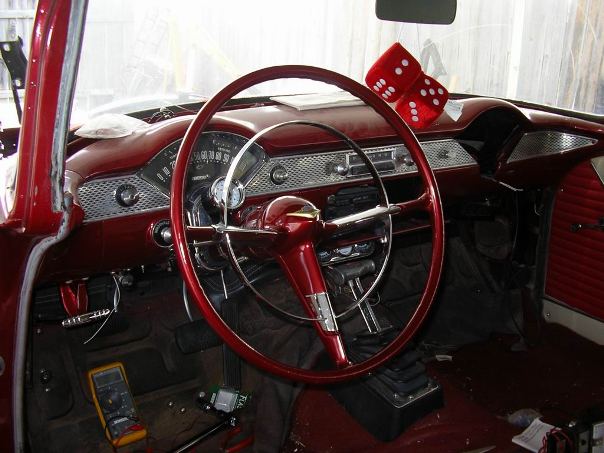 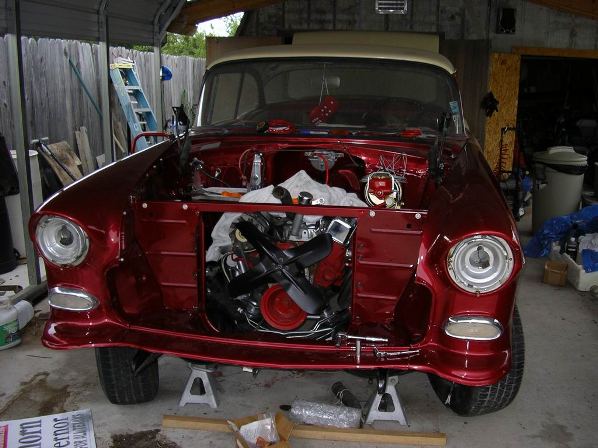 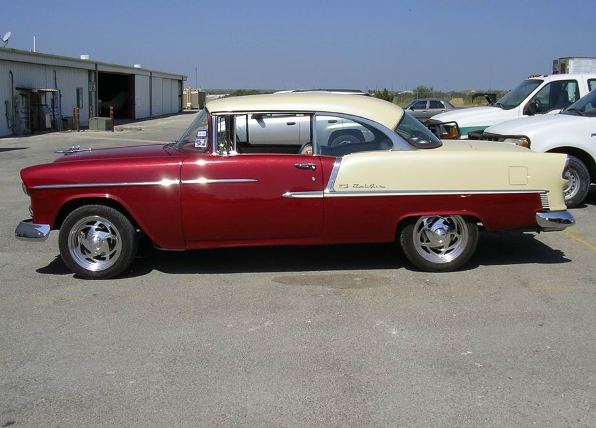 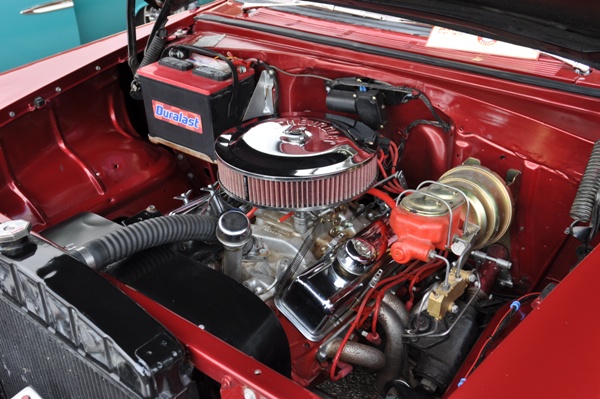 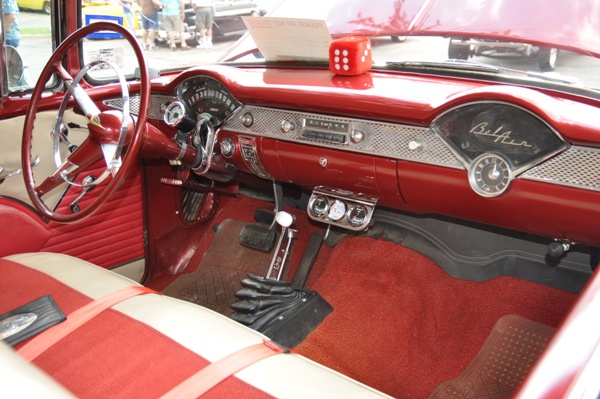 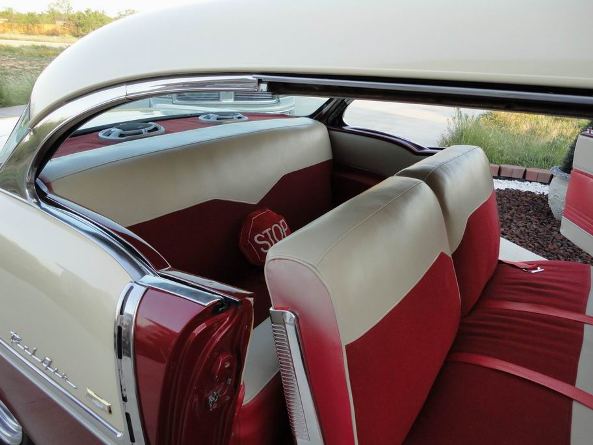 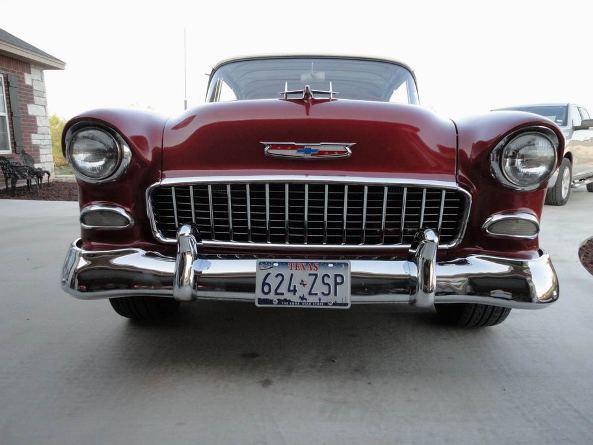 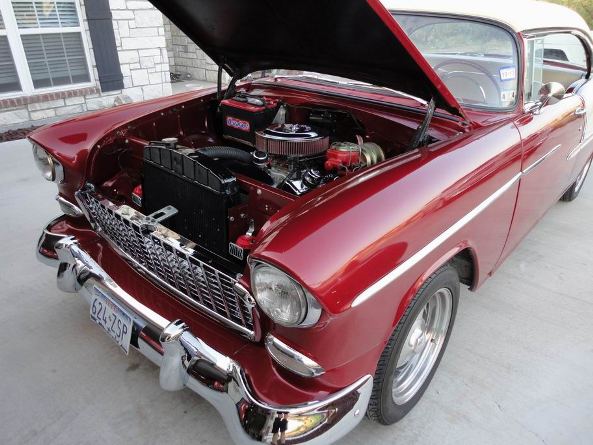 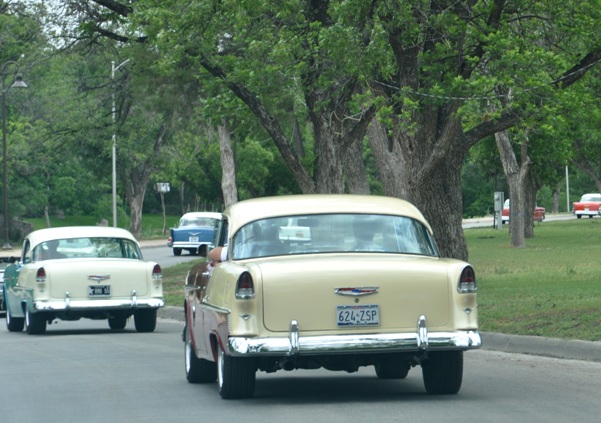 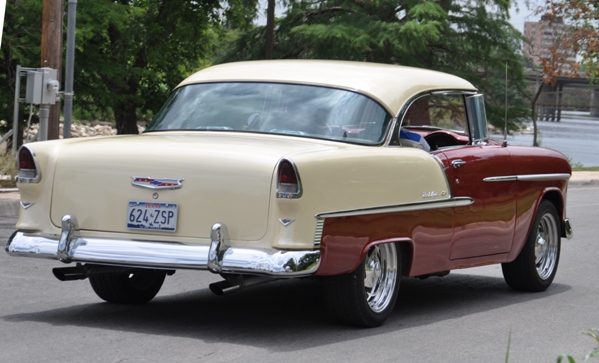 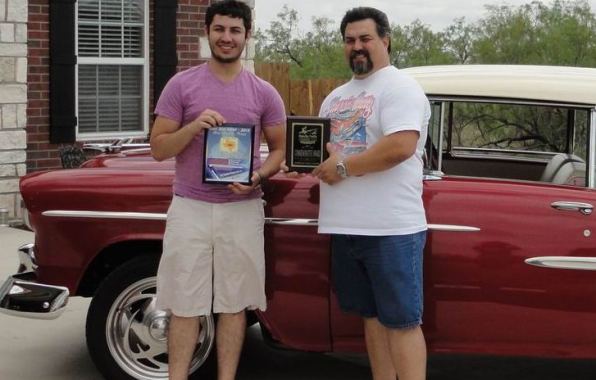