When the 2006 Lone Star Classic Chevy Convention put on a drag night, Dennis Gormley brought out his blue ‘55 Chevy to compete.  That reignited his long-time love of drag racing.  He enjoys being a part of the Dallas Area Chevy Club and the Gas House Gang Nostalgia Drag Club that he heads up.  Dennis started drag racing when he was 17, and in all that time he’s only drag raced Chevys (plus some motor cycles).  He’s has three ‘55 Chevys, but here we’re going to feature his nostalgic red gasser The MO-KAN Express.

Dennis has always been on the lookout to find a true survivor from the glory days of drag racing in the Dallas area.  On Christmas Eve in 2010 he found it in an internet ad.  Dennis rushed to Grand Prairie in a snow storm to meet the son who was selling his father’s old 55 Chevy drag car.  It was just what Dennis wanted; a red ‘55 gasser and he didn’t have to think twice.  The car had been raced all around the DFW area, including Green Valley Race City, Dallas International and was last raced at the Yello Belly Drag Strip, before it was put in the garage and forgotten.  It still has the paint job from the ‘80s and sports stickers from the NHRA bracket finals at Green Valley from 1980-81.  This car had one of the original nitrous oxide systems from the early ‘80s.  The car was well-recognized from that period.

It has a Chevy big block 454 with a Holley 850 carburetor, iron heads, and Childs & Albert rods.  It has a Sullivan built turbo 350 transmission and Chevy 12-bolt rear end.  The whole car needed to be freshened, but he didn’t really make any changes to it except for safety modifications.  He’s renewed the suspension, front end components and drum brakes.  It has no power steering, brakes or any of the modern hot rod items you might find on street cars.  The old car was completely gone thru, engine pulled, rewired, suspension modifications, reinforcement brackets, ignition, and many other details redone by his friend Reed Krauss.  The old nitrous system has been rebuilt and Dennis uses it occasionally when the racing rules allow.

The exterior has radiused fender wells, original trim and a one-piece fiberglass front end with original ‘55 Chevy grill and trim.  It has a stock dash and the roll cage from the ‘70s.  Dennis added red tinted Lexan windows to enhance the vintage look.  He has named it the MO-KAN Express to honor the MO-KAN Drag Strip in Joplin, Missouri, one of the oldest operating drag strips in the country.  The name is emblazoned on the side of the car and it sports a 1982 “Mad Man” license plate from Dennis’ extensive collection.

You can find Dennis and the rest of the Gas House Gang at North Star Dragway in Denton every week running down the eighth mile.  To date his quarter mile best is in the high 10’s at 129 mph.  He takes the car to Ennis, Kennedale and any other local drag events he can get to and participates with DACC in the Texas Muscle Car Club Challenge Drag Racing Series each season.

It was great fun to see Dennis and this great car featured on the Discovery Channel’s “Fast and Loud” in 2012.  This show is now one of the premier reality shows on Discovery.  He’s gotten lots of attention due to this program.  The original owner of the “Mad Man” plates the car carries even called Dennis wanting to buy the plates back after he saw a brief glimpse of the plate on the show… no sale.  There is talk of him doing another episode of “Fast and Loud” sometime in the future.  In the meantime you can watch a clip of Dennis and The MO-KAN Express during the filming of “Fast and Loud” made by Alexander Cantu, a friend of Dennis’.  Look for it on YouTube http://www.youtube.com/watch?v=1xLITCNRdaY. This clip took eight hours of filming time with six cameras in the car and four cameras on the car during the shoot.

…or you can just stop by your nearby drag strip and get a sense of the sport of drag racing. Thanks, Dennis, for preserving a unique vehicle and for continuing this sport that is so reminiscent of the glory days of our Classic Chevys! 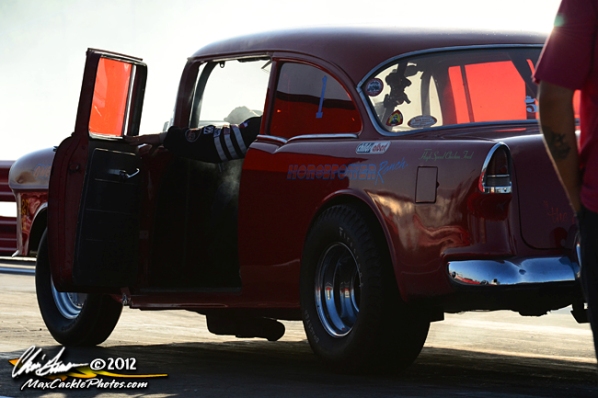 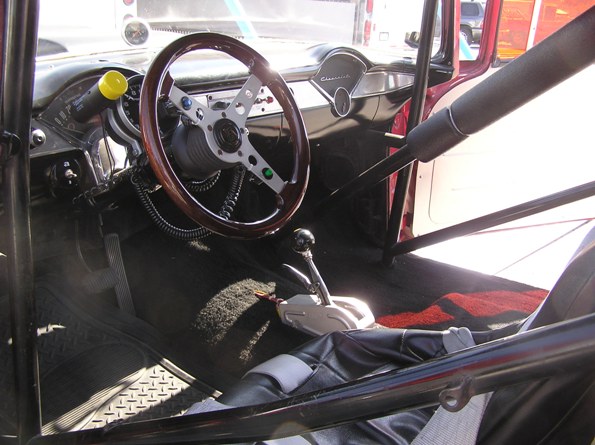 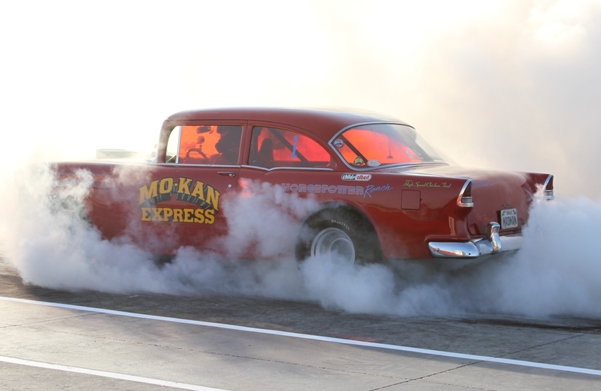 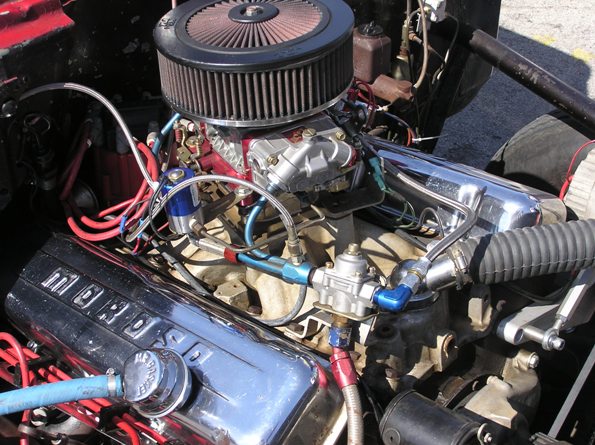 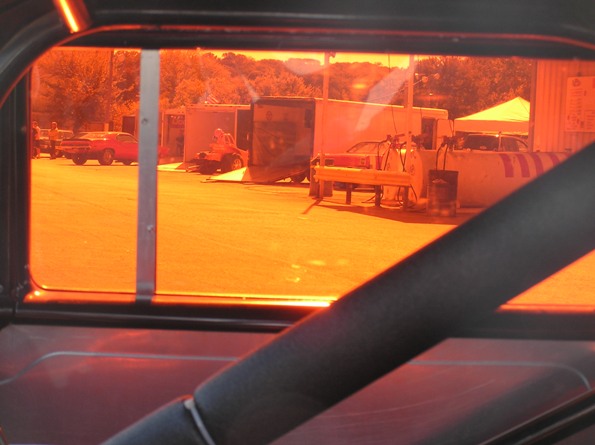 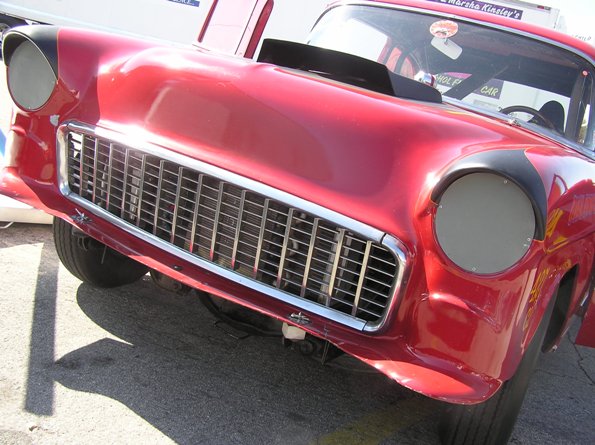 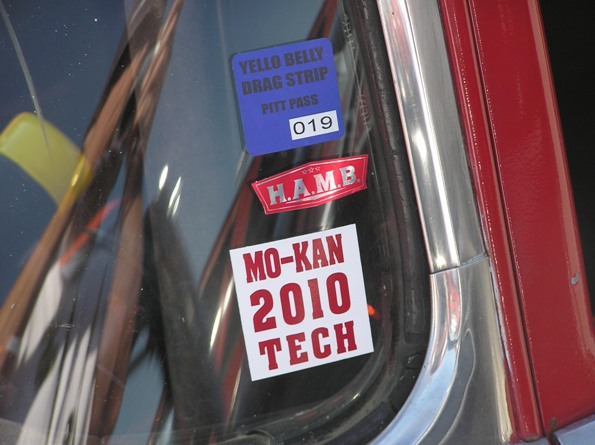 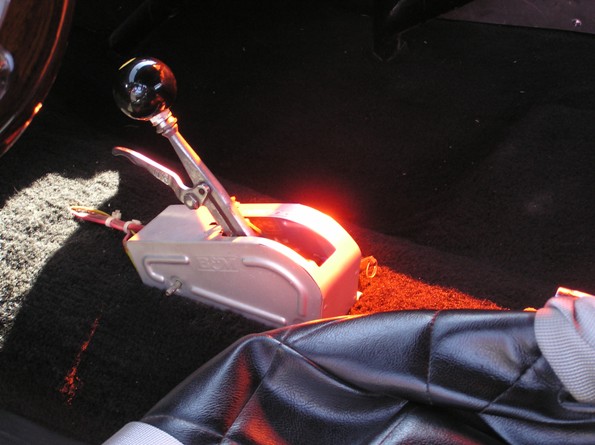 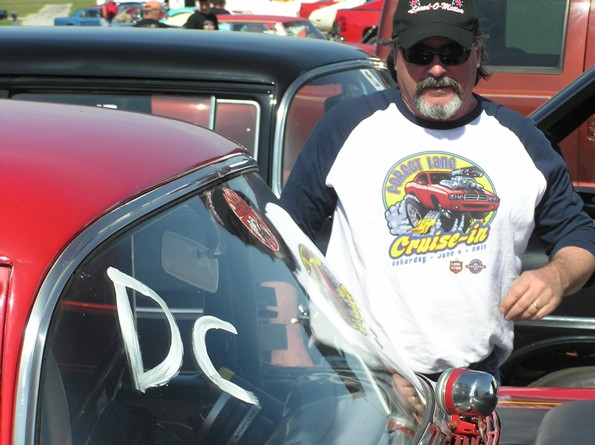 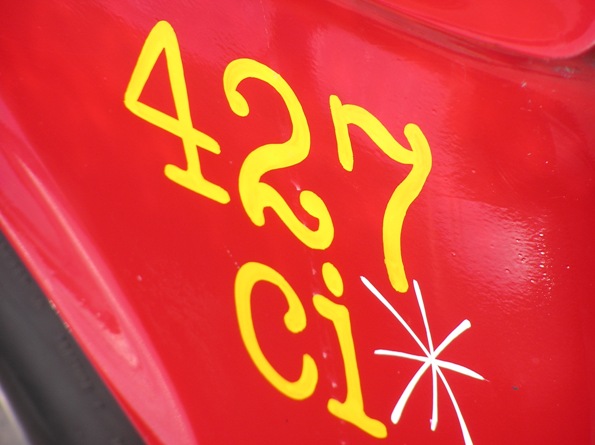 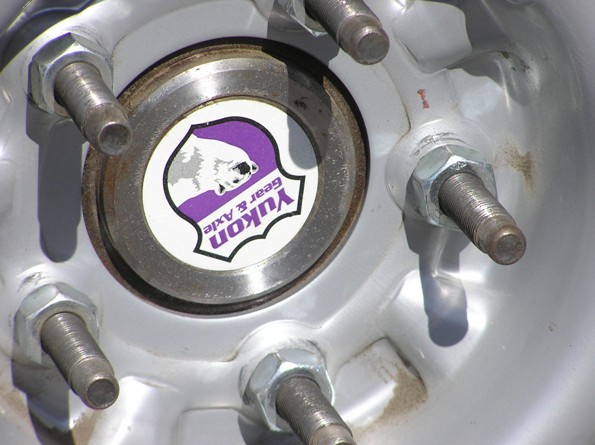 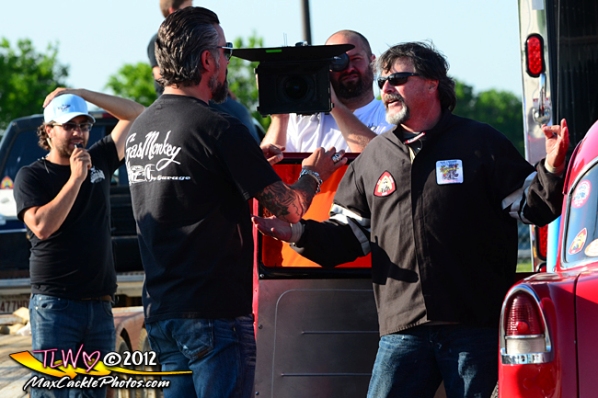 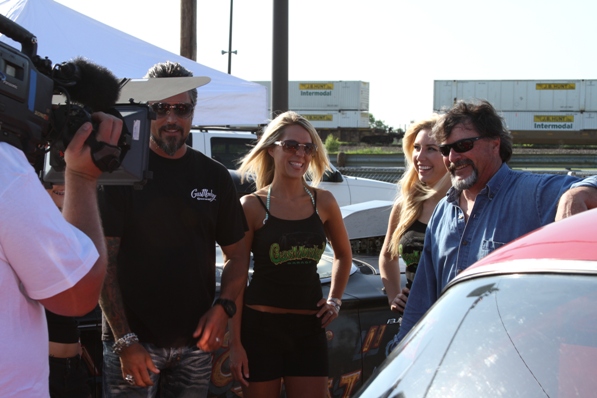 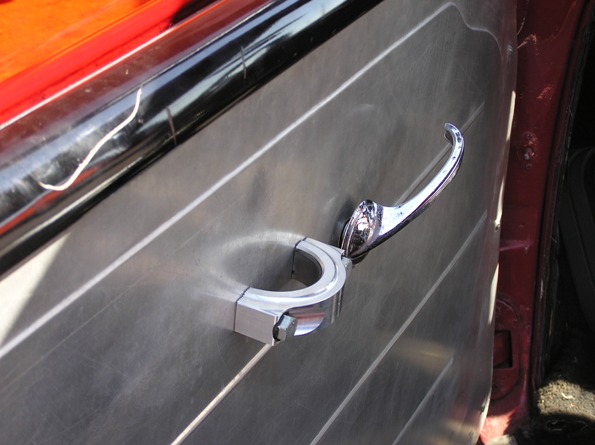 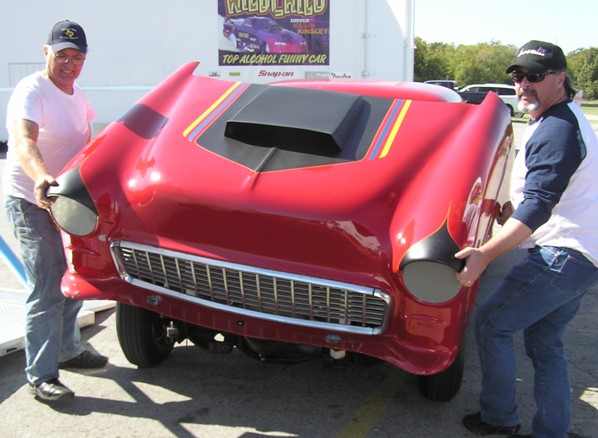 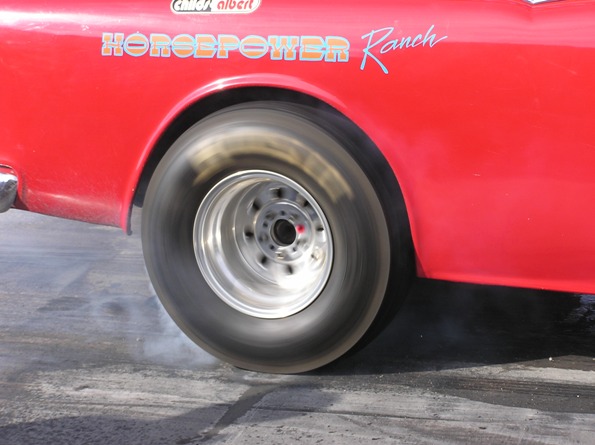 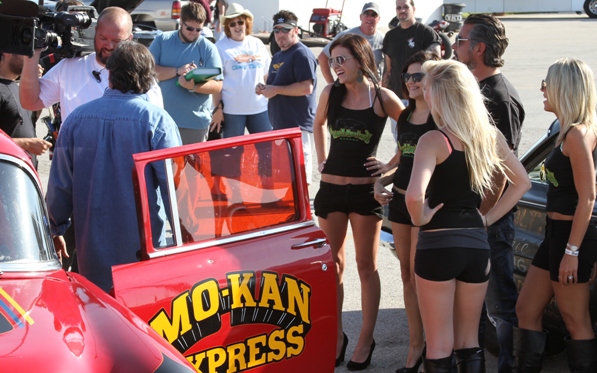 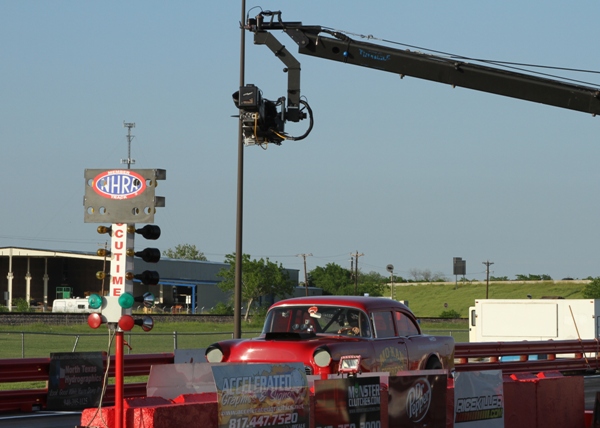 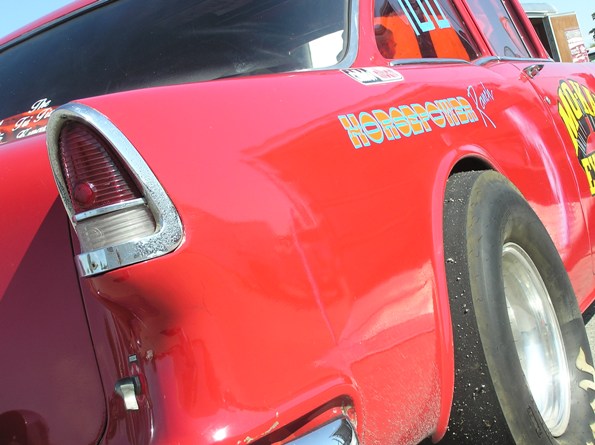 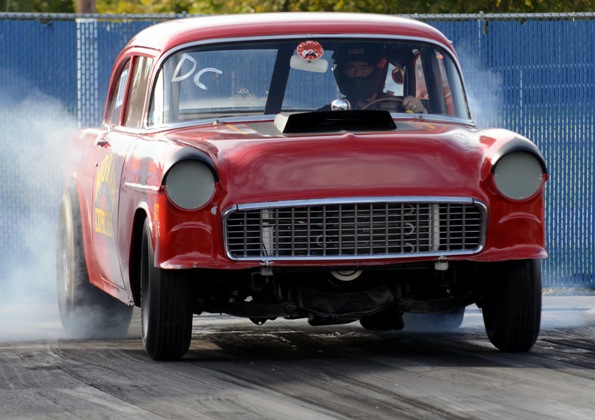 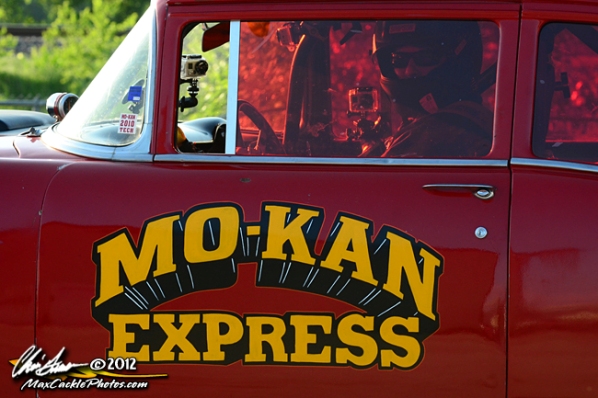