Rich Purvis retired from the City of Los Angeles fire department in 1997 after 30 years of service.  All those years he enjoyed drag cars, then Harleys, then boats, to airplanes, back to Harleys.  He ended up crashing three boats, three planes, one helicopter and four wives.  He retired to Lake of the Ozarks, Missouri for six years to enjoy the boating.  He had been snow skiing with members of the Dallas Ski Club for many years, so when he decided to leave Missouri, he moved to the Dallas area to enjoy his ski friends, and the low cost of living here.  He decided to live in Grapevine and has been here since Thanksgiving of 2003.

Rich ALWAYS wanted a Nomad and in the spring of 2009 found one he had to have.  He found his ‘55 Nomad on HotRodHotLine.com.  It was a shell that the local builder had brought from San Antonio.  The shell was already painted red.  Rich had the top of the car painted silver.  He also had the builder add a Serpentine front-runner system, headers, manifold, power windows, front disc brakes, power steering and air conditioning.  He had them put in a 350 crate motor, Mattson complete radiator/ac system and CPP master brake cylinder set up.  The upholstery has a tan all leather custom interior with a Classic instrument cluster, chrome garnish moldings, a dwarf steering wheel and Dynomat insulation throughout.  It has a “smoothie” front bumper, Lucas headlights and electric radio antenna.  He removed the side mirrors to give it a cleaner look and uses clip-on convex rear view mirror for safety when driving.  The front end has 2” dropped spindles, 2” shorter Ibach springs, and has 3” lowering blocks on the back and heavy duty sway bars on the front and rear.  It has Torque Thrust II 17” wheels all around, Nitto Extreme ZR tires, and 350 transmission with high performance shift kit and 3:73 rear end with positraction.

After a year and a half, Rich finally got it from the builder on the Friday before the Orange County California Good Guys Show in the fall of 2010.  He drove it around a little, then set out Monday for California to enter the Good Guys show with his brother, Jim, who is also into Classic Chevys.  The Nomad overheated before he even got to Weatherford, Texas!  There he tried to fill up and found his gas tank was leaking at the sending unit on the front of the tank where the mounting screws hadn’t been sealed.  He could only put eight gallons of gas in the tank at a time because of the leak, the gas gauge didn’t work very well, and the speedometer was slow - All in all, it was REALLY hard to figure out when he needed to stop to get gas.  He planned to go as far as Abilene, to see if things straightened out before turning back.  The next day it was cooler and he headed on west.

The rear end was whining and clunking by the time he got to Arizona.  In Tucson traffic at 3 pm, he found that he had no brakes.  After using the hand brake to stop he managed to get off the expressway and found there was a stainless steel line from the power steering laying across the brake lines.  Vibration had made holes in the master cylinder lines.  He got new brake lines installed while in Tucson and then while leaving for Phoenix in the evening he noticed his lights were flickering off and on.  So he got a hotel room and decided to just drive in the day time.  Here he found that the car door key wouldn’t lock the rear hatch, so he had to back the car up to a wall at the motel to make sure no one would get into it during the night. The next morning he found out that the car door key wouldn’t open the doors either, so he had to crawl in thru that unlocked rear hatch to get back in the car!  Somewhere along the trip the hood latch stopped working.  Fortunately, he had a bungee cord to hold the hood down for the rest of the trip.

Driving in the LA traffic, it was overheating all the way to his brother’s house.  They took the Nomad to get the rear end looked at and found that the drive shaft was too long and had caused the rear end to eat itself.  It spent two weeks in the shop in California and cost $1,200 to make the repairs.  The third week in California he was finally able to drive the Nomad again.  He entered a parking lot show in Huntington Beach and won First Place in his very first car show.  When he was ready to leave to come back to Texas, the car wouldn’t go into reverse.  It would start in any gear because neutral safety hadn’t been working at all.  The local transmission shop drained fluid and it was full of metal shavings, also from the drive shaft problem.

This was the final straw!  Rich had to have a little talk with the (unnamed) builder who paid FedEx $1,300 to ship the car back to their shop in Texas.  The final indignity was when the emergency brake cable broke and came off in his hand before it went on the transporter.  The bad luck continued as the transport driver had it on the top rack over a new Porsche convertible.  He did have the foresight to recognize the potential for the Nomad to leak SOMETHING!  So he covered the Porsche with plastic, and of course, all the gas leaked out of the Nomad through its cheap plastic fuel filter onto the Porsche while inside the transporter.

Rich documented 58 major things that went wrong with the car on the trip.  The (unnamed) builder paid for the brakes, drive shaft, hood, lights, etc. that were fixed on the road and repaired the other things, but would only pay for half the cost of the new transmission.  Go figure.  I know you’re wondering why he would even start out for California in a newly-built Classic car but Rich says, “I’d drive to California in any new car, which costs less than the Nomad cost me...” well - Welcome to Hot Rodding, Rich!

After driving the Nomad to the 2012 Lone Star Classic Chevy Convention at San Marcos, Texas in May, Rich took the car to Tim at HCC Performance in Dallas to work out more problems that the Nomad was having. Tim did a complete analysis of the car and promised to do the work in a timely manner.  He ended up adding an Edelbrock manifold, a 650 Holley carburetor and a Protronix ignition.  He replaced the rear wheel bearings and brakes and put stainless lines on the air conditioner, heater, power steering, brakes, gas lines.  He also replaced the cheap plastic gas filter that leaks with a good one.  He did $3,800 worth of work and Rich sings his praises!!!

The record Texas heat in the summer of 2011 made Rich decide to spend a month in California doing shows with his brother, Jim, in the summer of 2012, instead of visiting in the winter as usual.  Coincidentally, the National Chevy Nomad Convention was being held in Sacramento in mid-July also.  So for this trip Rich borrowed fellow club member Pete Herrera’s trailer and towed the Nomad to California behind his Dodge Magnum station wagon.  His pre-show detailing was wiped out by two rain storms in New Mexico and two in Arizona on the way to Sacramento and he spent a FORTUNE in gasoline.  But he ended up doing a sweep on the awards at the convention against more than 80 fantastic Nomads from all over the country.  Showing in the Modified Trailered Class, it won “1st Place”, “Best Paint & Body”, “Best Engine & Drive Train” and “Best Interior”!  The only thing he didn’t win was People’s choice which went to a Waldorf-style Nomad from California!  Rich and his brother did lots of other car shows around California while he was out there and he had an uneventful trip towing the Nomad back home to Texas this year.

Rich enjoys socializing and meeting new people at local car shows.  Most recently he won “Slick 6 Car” and “Best Back Seat to Make Out In” at the huge 2012 Fort Worth Cruisin’ for the Cure Car Show and “Best ‘55” at the DACC 2012 Fall Classic Chevy Show.  He now LOVES his Nomad!!! 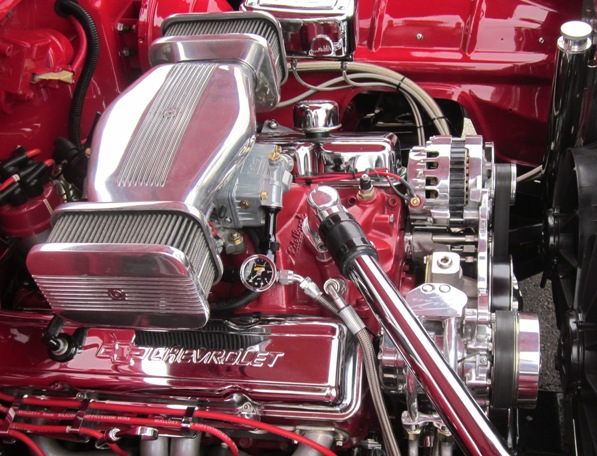 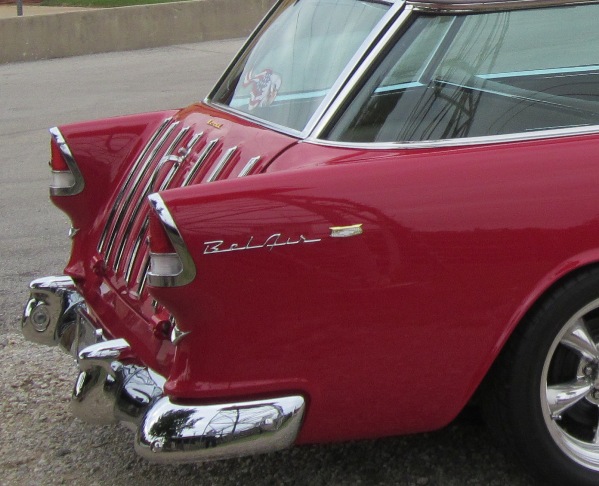 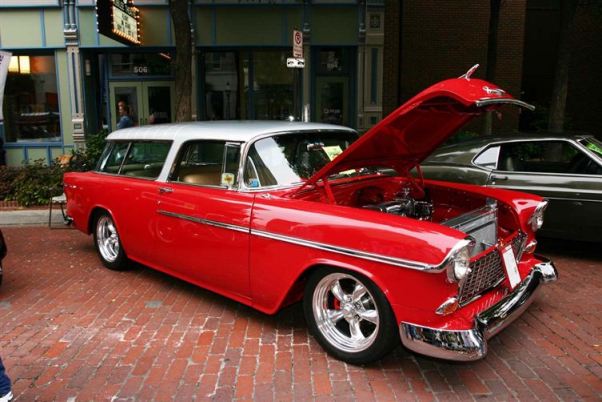 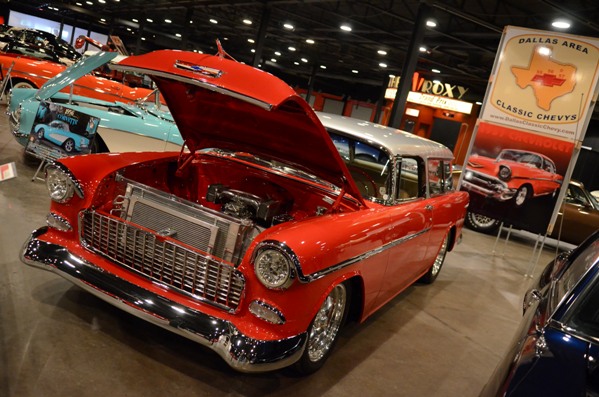 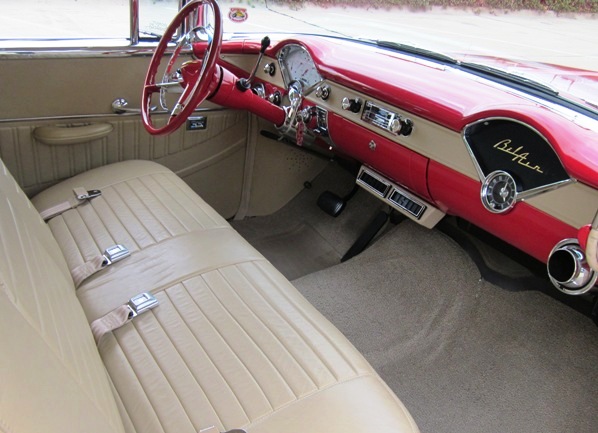 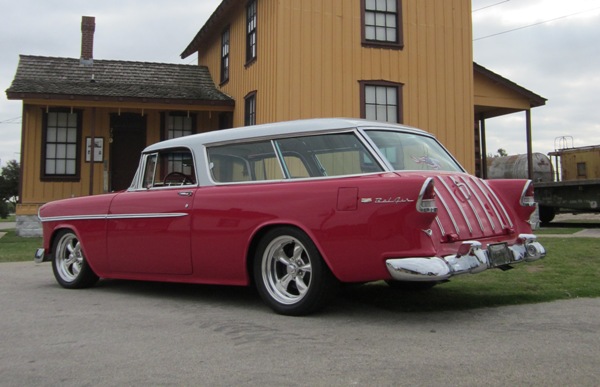 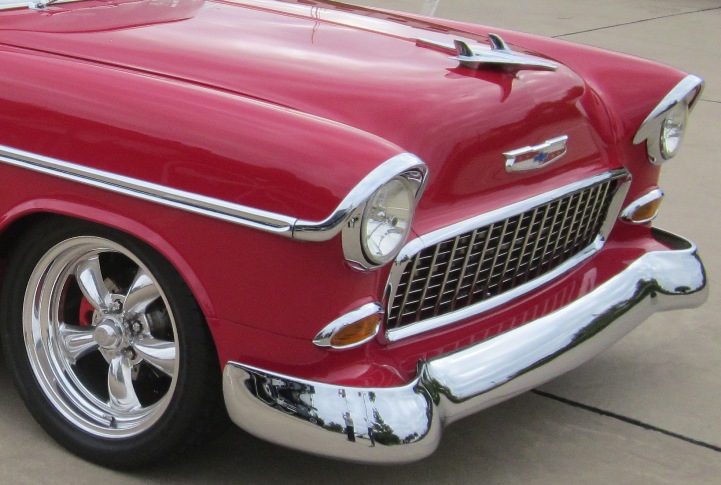 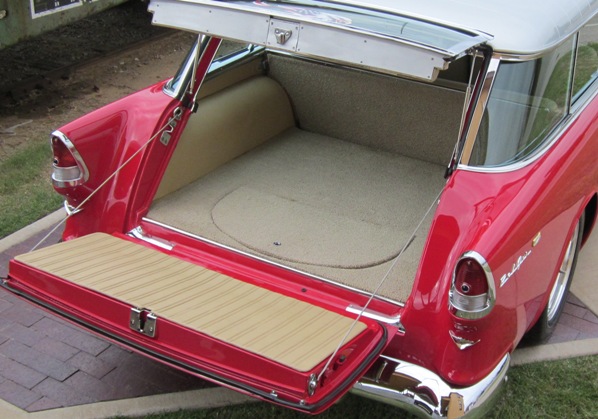 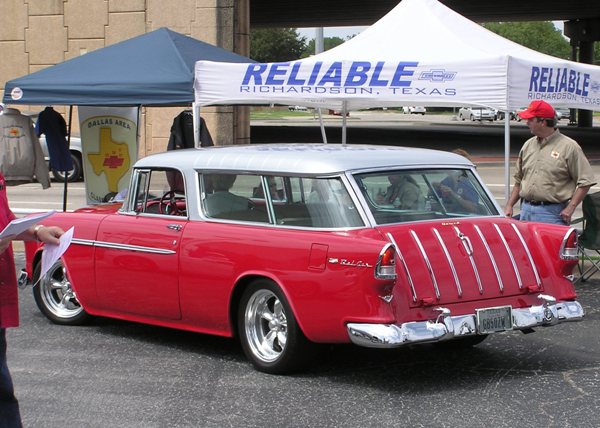 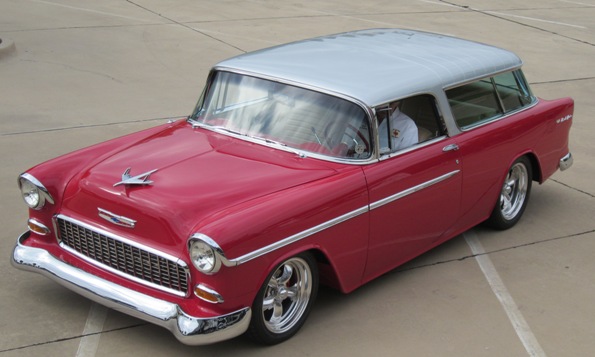 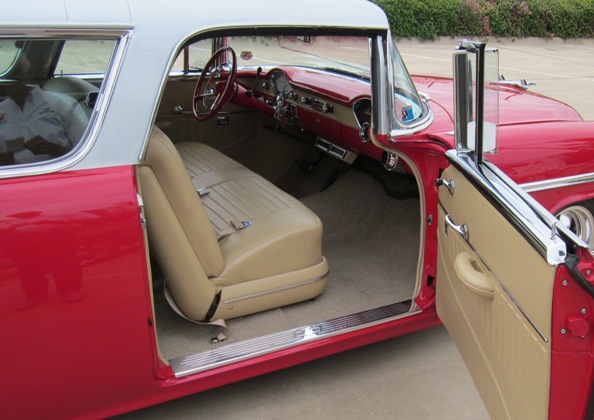 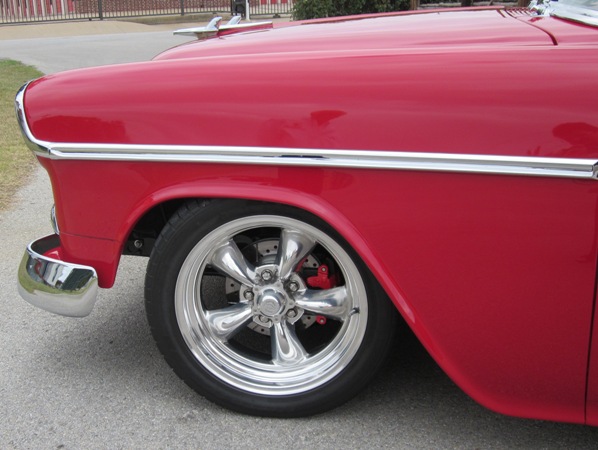 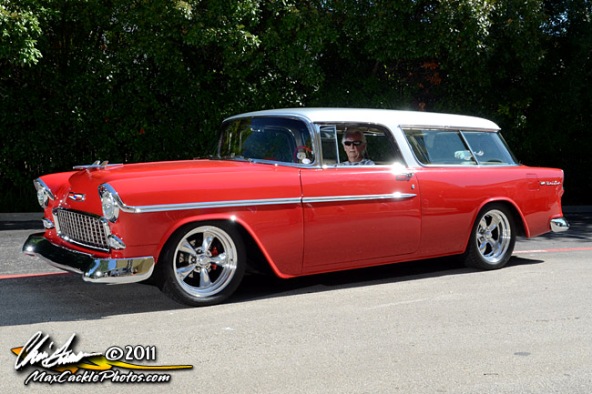 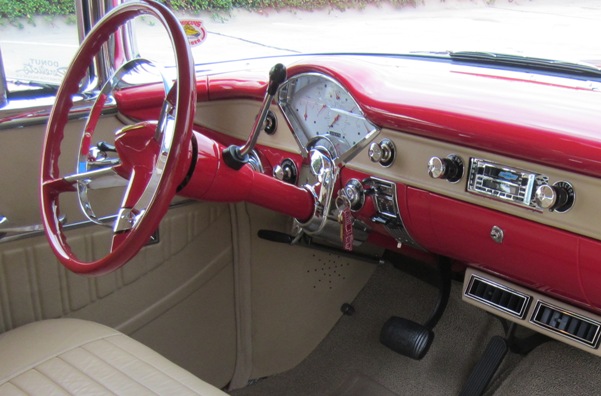 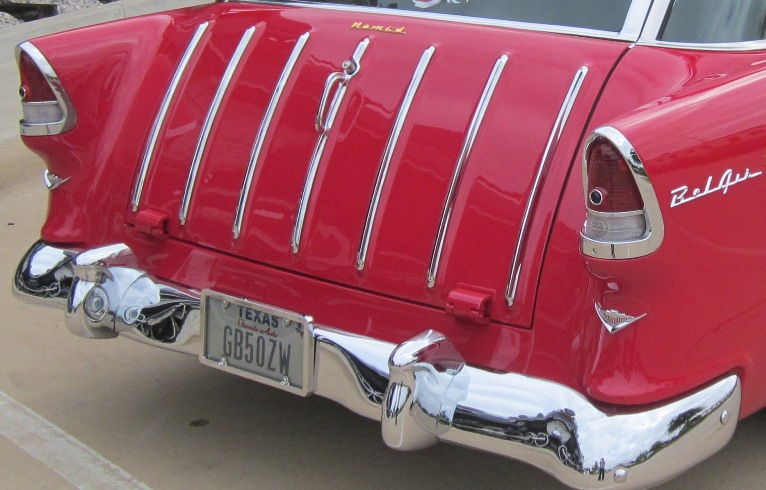 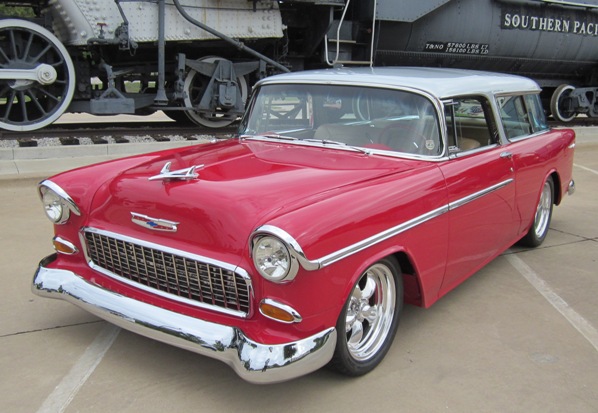 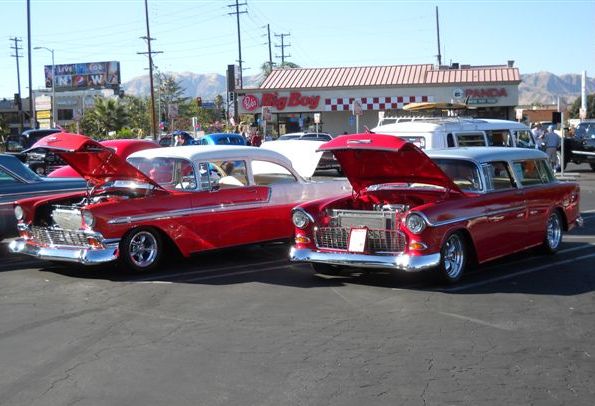 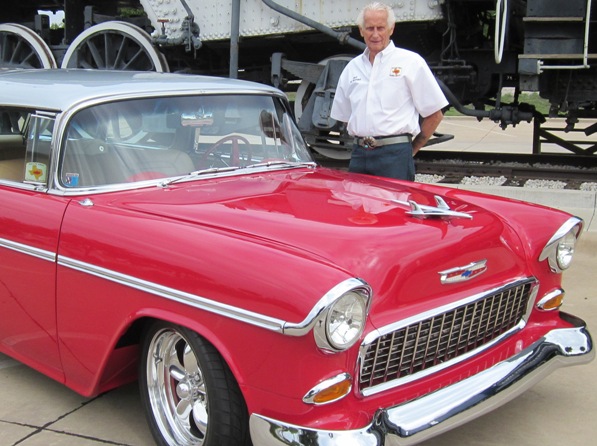