I was 14 or 15 in the early 60s when I started reading Hot Rod Magazine and going to drag races.  It wasn’t long before I got my driver’s license and started driving my dad’s ‘49 Plymouth on my newspaper route.  My very own first car was a 1951 Chevy Fleetline sedan, which I bought for $125.  I fixed it up with baby moons and porta-walls.  It also got a Fenton floor shifter, which took me forever to install and adjust (because I had no clue.)

A year or so later, as a soon-to-be high school senior, I needed a much cooler car so I bought a 1955 210 sedan from a used car dealer.  At $295, it was a real financial stretch.  It was bone stock with a 265 2-bbl and 3-on-the-tree.  After a few months of spirited driving, the 265 developed a rod knock, so I dropped in a 283 from a junkyard 1958 Chevy.  The 283 got new rings, bearings, and a valve job.  I assembled the short block and heads myself with the help of a older, wiser gear head.  (He was around 20.)  I drove it with a 2-bbl carb for a while, but finally found a Carter WCFB 4-bbl and manifold for it.  I also added dual exhaust and glass packs (from Sears, as I recall), and chrome “scavenger” pipes that were a straight shot from the mufflers to just in front of, and slightly below, the rear axle.  Throw in a real Hurst “Mystery Shifter”, and I was simply too cool for school!

A year or so later, I sold the ‘55 because my parents said I didn’t need a car while going to college and living in a dorm.  Yeah, right.  One semester later my dad took pity on me and loaned me a ‘56 Ford that he had just bought for work.  (At least that’s how he justified the $165 to my mother!)  I ended up replacing the lame 292 2-bbl with a ‘57 312 4bbl, which was actually a pretty stout motor.  Before installing the 312, I replaced the rings, bearings, and gaskets with parts from Sears.   I also yanked out the 3.00 axle (literally the entire axle assembly) in favor of a 3.50.  At $20 or so, it was one of my all-time best performance investments.

Can’t remember what we did with the Ford, but I found a ‘57 Chevy 210 the summer after my first year in college.  It also had a 265 (yes a ‘57 265) and 3-on-the-tree.   I was flush with cash from my $1.60/hr summer job, so I found another junkyard 283, and had a machine shop in downtown Ft. Worth prep the block properly, including boring the cylinders +.060”, which gave me 292 cubic inches.  I bought some forged, domed TRW pistons for the outrageous price of $5 each, and had the heads rebuilt.  And I’ll never forget those Hedman two-piece “4 into 2” headers – painted white, of course.  Initially the engine had a Duntov “30-30” solid lifter cam, but it was really too much cam for the little 292.   I ended up buying a milder Isky cam (don’t remember the specs) which worked pretty well with my Carter AFB carb, new 4.56 gears, and Muncie 4-speed.   Needless to say, the car did not cruise well at highway speeds, but the quick-revving engine and 4.56 gears made it a giant-killer in short street races!  Less than a year later, I joined the Navy and gave the ‘57 to my brother, who installed the engine and trans in a very nice ‘56 Bel Air sedan.  The ‘57 body got sold for something like $50, but I don’t think I ever saw the money.  When I look back on my engine assembly skills, it’s amazing the 283 and 292 didn’t seize, spin bearings, or flatten cam lobes!

A year after joining the Navy, I got engaged and bought a used ‘66 Nova Sport Coupe with a Power Pak 283 and 3-on-the-tree.  Since I was now a semi-responsible adult (and had almost no spending money) I did virtually no mods to the car.  The ‘66 was followed by marriage and two new babies – my son and a brand new 1970 Nova Coupe with a 350 and a 4-speed.  I had that car for less than two years, and it was the last performance-oriented Chevy I owned until 2003.   However, we did have one more child in the 70s -- a daughter.  And I’m still married to my wife Janet.  Wish I would have kept one of those Novas that long!

Flash forward to 2003.  I bought my current 1955 210 sedan from a guy I know in the Lewisville area.  He had owned the car for 4-5 years, but got distracted by two new toys: a ‘34 Ford Coupe and a ‘39 Ford sedan.  My “new” 1955 Chevy had a mild 350, TH-350 trans, and a 10-bolt axle with 2.73 gears.  The seats had been recovered in 1999 with tuck ‘n’ roll vinyl, but the door panels were in sad shape (and stored in the trunk).  The original cloth headliner was drooping and stained.  The brakes (GM metric disc on McGaughy dropped spindles) were marginal and the cooling system wouldn’t keep the temp below 230-240.  In fact, on the drive home to Plano, I had to stop twice to add coolant.  The next morning I counted seven fluid leaks of various types on the garage floor.  Yes, seven!   I came seriously close to returning the car.

I persevered and tackled one problem at a time, and soon had a reliable cruiser.  After taking care of the leaks and cooling system, I improved the brakes by going to a larger booster and new rear drums and shoes.  Still not great, but OK.  I replaced the way too-big 750 CFM carb with an Edelbrock 600 that I rebuilt after buying it for $50.  The smaller carb immediately improved throttle response and fuel mileage.  Larry Hankins at Village Upholstery in Highland Village, TX built custom door panels for me, along with new B and C pillar panels.  He also installed a Trim Parts vinyl headliner, vinyl windlace, and sunvisor covers.  Prior to giving the car to Larry, I rebuilt the door internals, eliminating each and every rattle.  I also installed DynaMat Xtreme on the floors and doors.  What a huge difference this stuff makes.  It was a transformation from echo chamber to insulated vault.   Both doors now close with a solid “thud” – no rattles or ringing.  During the first year or so, I also installed a used Griffin aluminum radiator and a Raingear wiper kit.

Over the next few years I replaced the ‘55’s TH-350 with a Muncie 4-speed and swapped out the 2.73 gears for a set of 3.42 gears from Randy’s Ring & Pinion.  This was my first ring and pinion swap, but it went well with the help of Randy’s.   It’s not a trivial job and requires some special tools and lots of patience, but it’s no longer a mystery to me.  Since then, I’ve also rebuilt my ‘69 pickup’s 12-bolt rear end, including the addition of an Auburn limited slip.

The solid lifter sound and the whine of the Muncie have taken me back to the 60s.  And the 327 with modern cam and heads has the best of both worlds – torque and horsepower.  The thing pulls like a freight train from 2000 RPM and revs like crazy.  Now I just need an overdrive gear to make it more comfortable at highway speeds.

The latest updates: suspension and brakes.  Earlier this year I installed new springs front and rear, along with stock spindles.  The car now has a stance I remember from the 60s – level front to rear, or maybe even a shade higher in front.  I also added a Wilwood front disc brake kit to the stock spindles.  It uses 11.75” rotors and forged 4-piston calipers with aggressive pads.  Even with a manual master cylinder, it stops better than my car did with power brakes and oversize metric calipers. 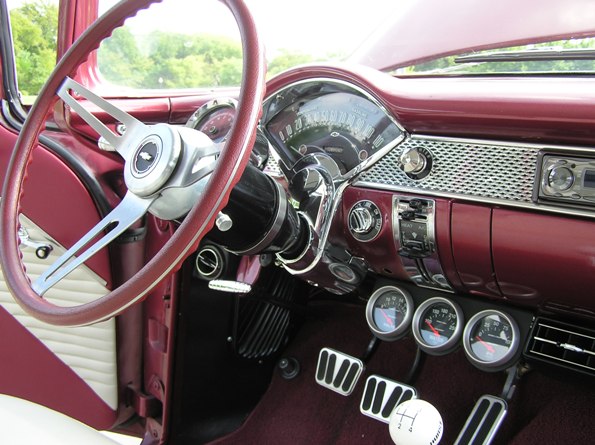 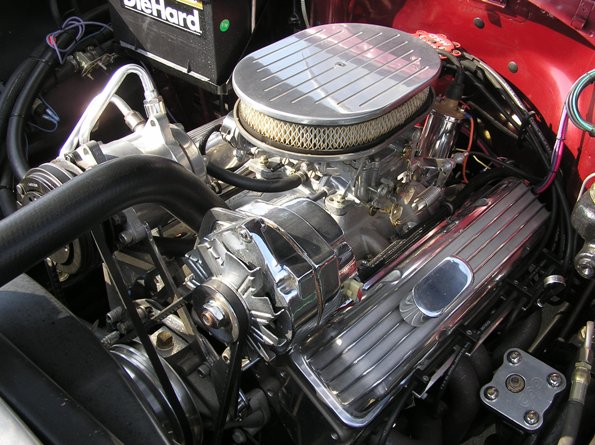 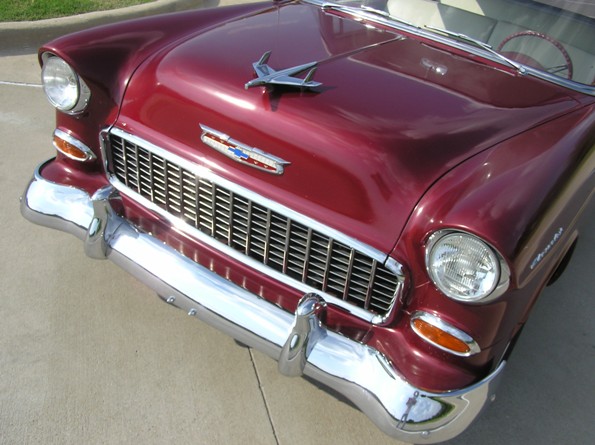 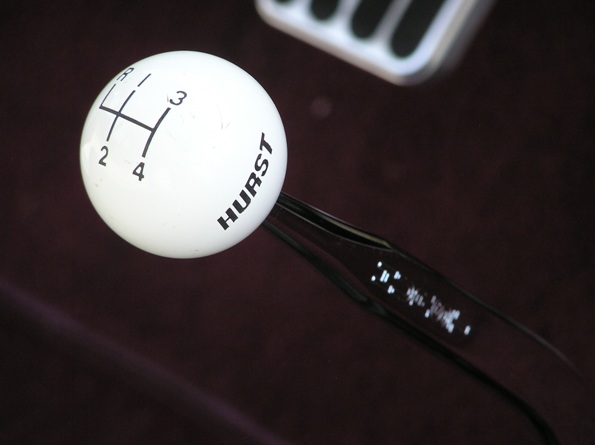 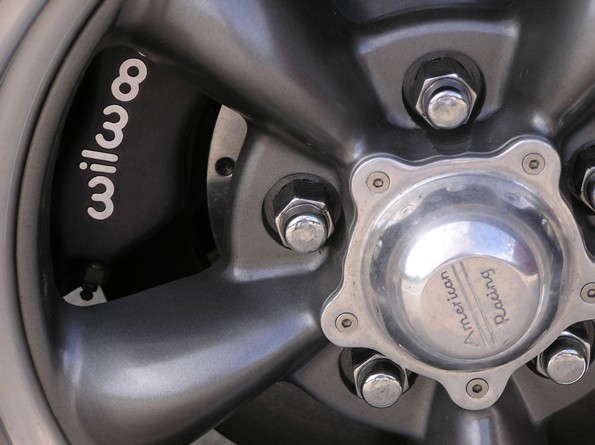 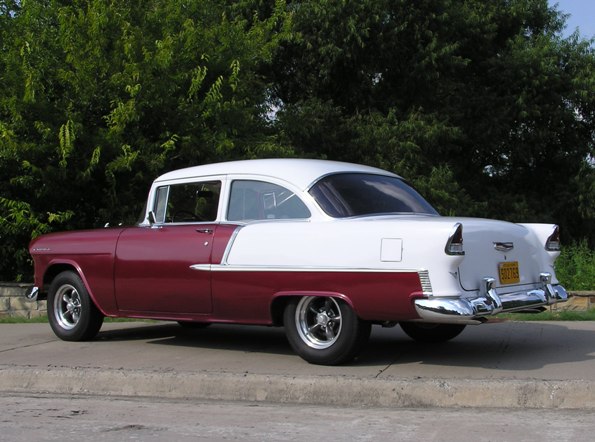 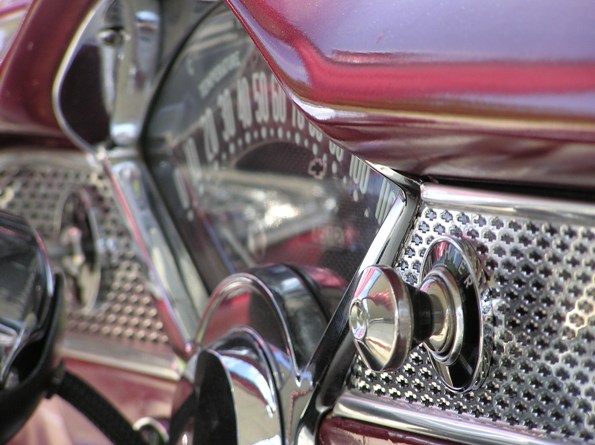 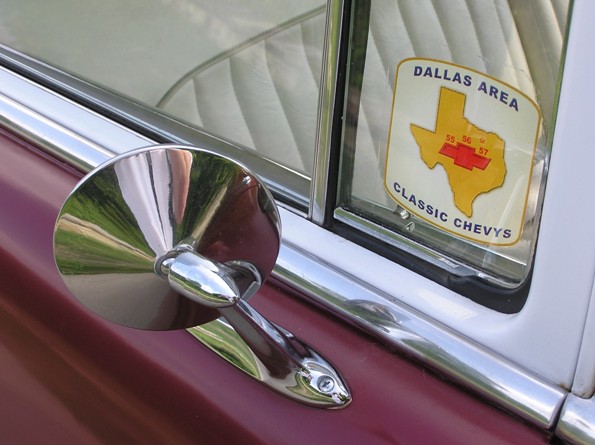 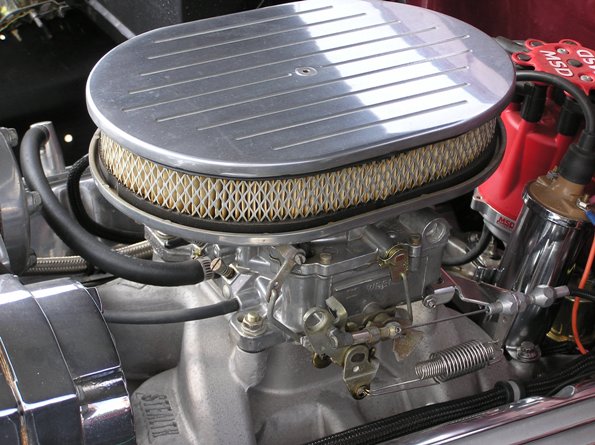 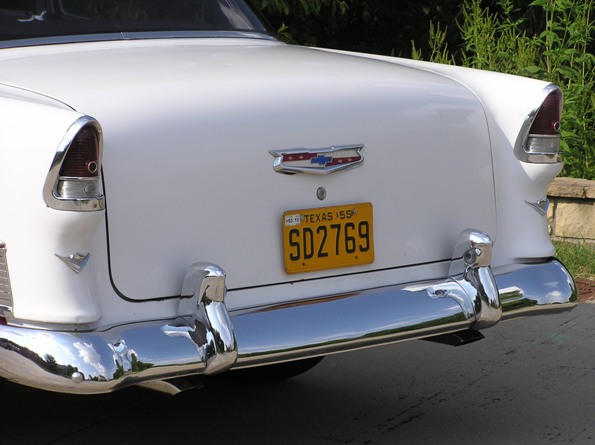 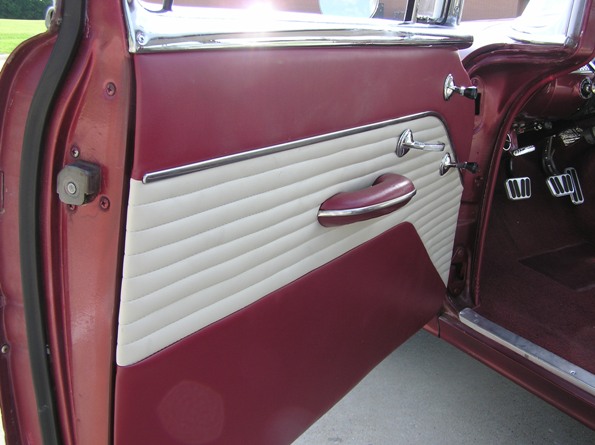 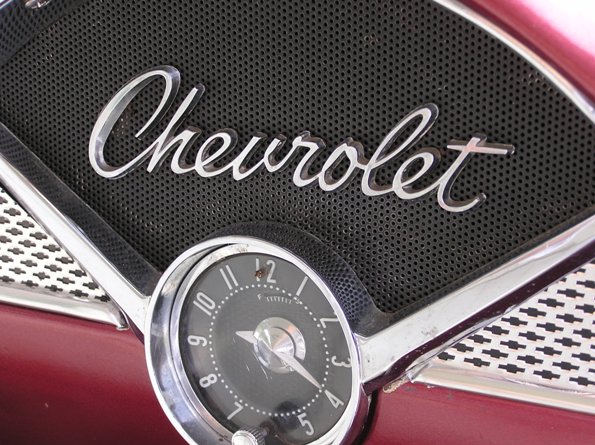 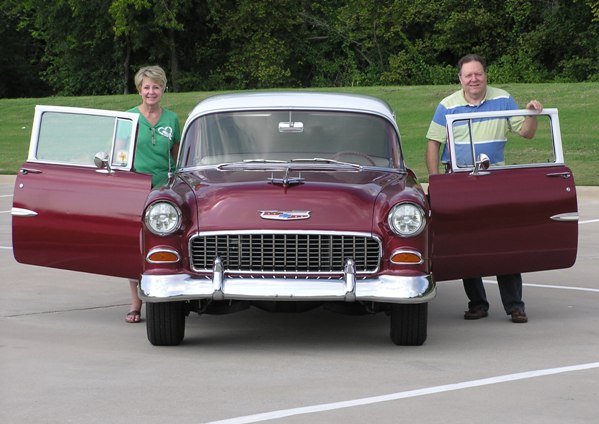 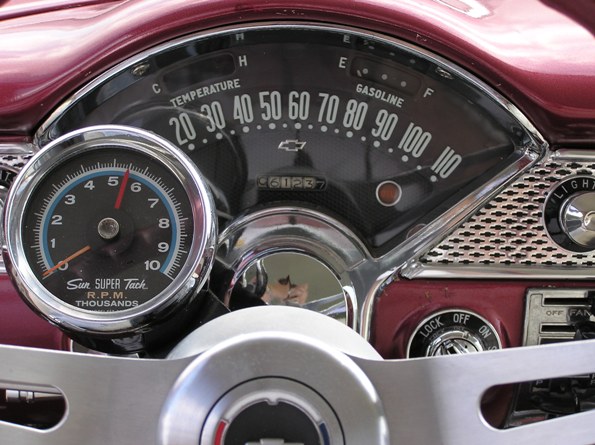 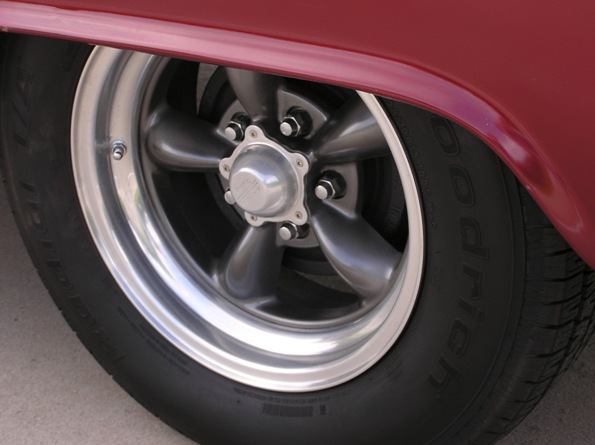 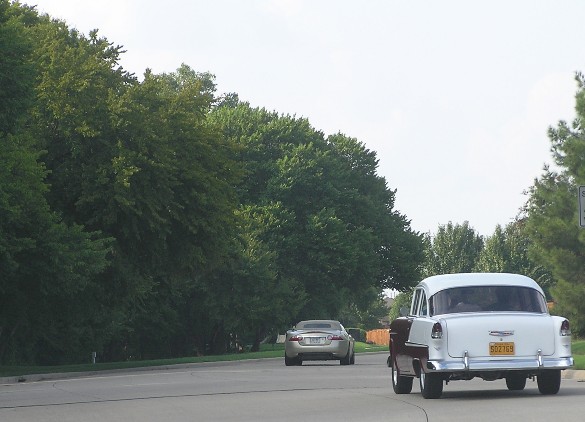